With no sign of any Westerner, she passed cautiously through the rotted wooden boat catching glimpses of dark faces peering through the shanty cabins intrigued by her blonde hair and tan skin. Given the spontaneity of the six-month journey she quickly realised that her basic Indonesian would not serve her in this situation.

There was a task she had been putting off for as long as she could bear but she was now desperately needing to locate some form of a toilet. The rear of the boat was dark and unexplored, a kerosene lamp clattered noisily against the wall, hung by a tattered rope giving just enough light to locate the only door she hadn’t attempted to enter, a door barely hanging upright on its hinges. An Indonesian man sat nearby, cigarette poised between his lips, his dark eyes staring her down, she passed with little care as she was at the point of bursting.

Sea sickness hadn’t bothered her until the sight of the apparent toilet, perhaps it was lucky to not be so well lit as she closed the rusty door, barely managing to fit in the small area, the rock of the sea causing her to slip and slide on the mouldy floor, the stench almost unbearable. She noticed a small coke bottle and plastic pipe letting water pass through the drilled hole in the wooden deck, barely keeping up to its intended task but assuring her she must have been in the right place.

She returned to her sleeping area, stomach now churning, once again finding her spot nestled between dozens of Indonesians on the floor. Chickens noisily contained in woven cages, cockroaches scrambling past avoiding the heavy footprint of restless children. Her iPod became her saviour, relieving the anxiety and reality of how far she had stepped out of her comfort zone, the lyrics of her favourite songs meaning more than ever before, each beat matching the beat of her heavy heart as she eventually drifted to sleep only to be woken by the violent sway of the boat in the treacherous swells. She lay quietly observing the movement of life around her.

She began to cultivate thoughts of the human condition, the basic need for survival and safety, food and water, love and equality. Later she would discover a boat travelling that night on the very same route had capsized in the rough seas killing seven locals. She had risked it all for the prospect of perfect waves.

She was two hours away from her destination, now travelling by a small dugout canoe navigating bays lined in palm trees and mesmerising crystal blue waters. It had taken almost three days of travel. The sight was absolutely spellbinding. A surfer standing tall in a perfectly groomed overhead barrel breaking along a pristine reef. An immense grin crept over her weary face and shivers lit up her spine, her previously held doubts of the journey vanished and she had finally reached the ultimate surfer’s dreamland. 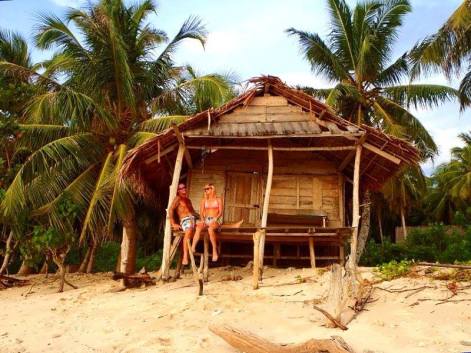