While I can’t recall the exact reason I was feeling so down this day, it was most likely another heartache story from an ex-boyfriend. All I know is I absolutely craved the touch of ocean on my skin and to once again experience the surreal feeling of riding those magnificent waves. I eagerly ran down the secluded sandy track through the lush forest to check the conditions. I gazed out across the glassy ocean surface and spotted a fun looking 2-3ft shore break. Jumping for joy I bolted back down the track to the car. In no time at all I was running into the warm waters, surfboard under arm, taking in a deep breath of the fresh, salty air. As soon as I was in waist deep, I released my board into the waters and dived to the sandy bottom, resembling mermaid qualities as I once again felt at home under the sea.

A small crowd of surfers were already on the best peak but I really needed solo time in the ocean and didn’t feel like competing for waves. I distanced myself far down the beach and straddled my board as I watched the glowing ball of sun rise above the ocean. A sight I will never once grow tired of. Gazing back to the surface of the water, I spot a set coming my way. Quickly paddling to my right, I position myself towards the peak of the wave and turn my board towards shore for takeoff.

A perfect steep drop, gravity forces my arms behind me as I free fall with the lip and just make it into my first bottom turn. I cast my eyes to the top of the lip, feathering high in the golden sunlight and gouge my fins to break the lip apart, sending sprays of salty water into the skies above. Addicted to speed I race towards the end section of the wave and once again gouge my fins into the face of the wave, digging my arm into the wall, while I lay back and complete the turn, before flicking off the back of the wave, leaping into the depths of the ocean once again. I feel intoxicated with joy and buzzing with adrenaline.

Paddling back out for more, I laugh out loud to myself at the thought of the hungry crowd, a mere 100 metres away, fighting over waves amongst themselves. As I make it out the back of the breaking waves, I once again straddle my board waiting for the next gem to come to me. I look over to the crowd with a big grin, but notice a commotion in the water. Another girl had just taken off on a wave and was almost knocked off her board, as a large dolphin leaped out of the wave right in front of her.

The other surfers were lifting their heads high to get a better view of the rest of the pod of dolphins which had surrounded them. I jumped as I felt the water beneath me move and looked down to see two dolphins, each hovering, completely still, either side of me. I lifted my feet up and let out a loud squeal, unsure of what they were doing.

I’ve spent a lot of time in and around dolphins in my surfing life but never had experienced this kind of behaviour. I felt my breath grow heavy and my body freeze up unsure of my next move. As I closely watched them I became aware that they were here for a reason. They chose to hover close to me, out of every other surfer in the water that morning. Suddenly I realised they most likely picked up on my energy. They were aware that I had been having a rough time and they were here to remind me of the true beauty of life amidst the chaos. Just as the thought passed through my mind each dolphin darted off in different directions.

I decided to surrender to joining the safety of the crowd as I realised there was quite a bit of marine action in the water. As I paddled closer, I noticed a large pod of dolphins were still interacting with the surfers. In fact as I approached, the entire water was blackened with bodies of dolphins great and small.

The huge mumma dolphins appeared to be creating a circle to keep their babies safe in the middle, a trait I had previously learnt about. There had to be at least fifty dolphins present. For some reason the mumma dolphins were highly interactive when they had their offspring and always came up closer to surfers at the time they were nursing their young. I would love to know the reason behind this, perhaps it was to teach them a lesson about humans.

It was such a moving experience to be in the ocean on this day. There was not one surfer out who didn’t have a huge grin on their face and didn’t jump at the sensation of a dolphin brushing up against the side of their dangling legs. The bigger dolphins seemed to have come up with a game, where they would grab the babies in their beaks and throw them into the air.

Many times I would turn around to see a little dolphin spinning through the air.  It was one of those moments I really felt I should have got out of the water, not knowing if any sharks were joining the party or not, but I knew this was a once in a lifetime experience and I didn’t want to miss a minute of it. I’ve never come face to face with baby dolphins like I had on this day, many of them curiously poking their noses out of the water and looking around with their beady eyes to see what us humans were all about. We were all reminded how incredibly lucky we are to be surfers, playing in the heart of mother nature. 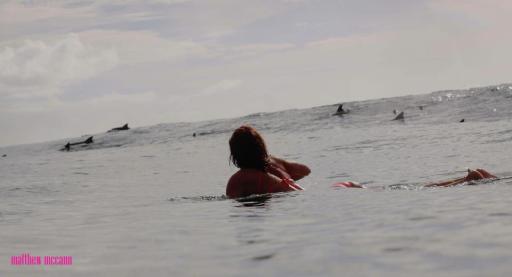