Recently I spoke to a friend about a house party I briefly showed up at and how I had only had two small 330ml bottles of Stones ginger beer. Those two small bottles held almost 60g of sugar as I later discovered. Of course this wasn’t to be found anywhere on the bottle, I had to search the internet. I wouldn’t consume that amount of sugar in many days let alone one sitting! She asked me if I had watched the documentary called That Sugar Film which I hadn’t but was inspired to do so that night. So I did.

“People on this planet are growing sicker every day.” 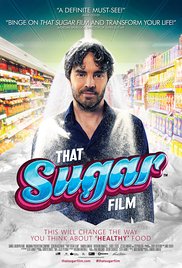 ridiculous medical experiment to prove to others just how bad sugar is for your health. He went from no sugar in his diet to consuming the average Australian intake of a whopping 40 teaspoons a day. The aspect of the experiment that captivated me most was that the sugars had to be hidden sugars, such as those in breakfast cereals, juices and even savoury pasta sauces.

Within two weeks he developed fatty liver, his energy levels rapidly declined, his ability to focus completely decreased and was well on his way to a pretty dangerous health situation. After all, sugar is a very modern and foreign element of our lives as compared to our evolutionary past. Unfortunately, it’s become the norm to be in just about every food item in our supermarket.

Throughout the film I noticed common food products that I include in my diet but in moderation, as I always make sure I read the ingredient panel on the rear of the packet. However, I was a bit shocked to see him guzzling a milk probiotic supplement you might know as Yakult in Australia.

Here I was thinking I was taking control of my gut health with my daily probiotic intake, but really I was consuming 9g of sugar per tiny bottle. That’s over  two unnecesarry teaspoons. If anything that’s going to upset my gut balance not keep things in balance. Here are some other alternatives I’ll be indulging in once I use up the last of my Yakult supply in my fridge:

As you can see there’s plenty of options available for alternatives to the cleverly marketed and convenient shot size bottles of Yakult. As Eastern practices are teaching us, health begins in the gut and we have to be sure we are looking after this balance for our overall vitality. Make it a daily habit to include probiotics somewhere throughout your day.