As intoxicating as it is, surfing will only fill your cup to a certain level. It just took me all of my teens and twenties to figure that one out. Because back then I would’ve laughed at anyone even suggesting that there might be something equally, or more fulfilling than riding waves. I was just so absolutely obsessed with surfing. That was my world as I knew it. It wasn’t until a strange little flame started to burn somewhere in the depths of my body, that I experienced fleeting thoughts of whether there was something more that life had to offer.

When I found myself standing with my partner in the blazing Timorese sun on a surf trip a few years ago, I wasn’t dreaming about riding the perfect wave that broke outside our bungalow, but rather I visualised swaying in a nearby hammock nursing our baby and wasn’t overly fussed if I surfed or not. I guess that was the true turning point when I realised that perhaps I had milked surfing for all its worth.

Fast forward to the now, I write with our newborn daughter curled up on my chest softly snoring away in her very own dreamland.

There are many times where we each find ourselves looking back on pivotal life events where we recollect the most profound moments, particularly those that have shaped our adult lives. For me, I draw back to when I had returned from extensive overseas travel 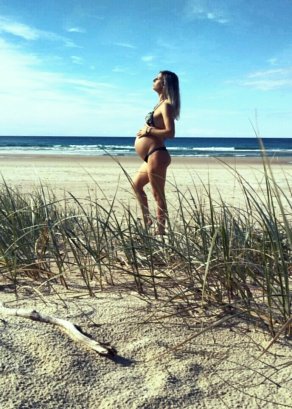 and endured the heartache of an abortion. For a long time I battled fears that something might happen in the future that would prevent me from having children, along with a grappling thought that I would be incredibly regretful of my decision to terminate, should I somehow never have the chance to fall pregnant again.

Ironically, not even a year after the abortion, my greatest fear had somehow manifested itself. While travelling solo, I had suffered a head injury surfing a typhoon swell in remote Phillipines. After passing out unconscious and waking with sharp pains in the area of impact, I had to fathom grim thoughts of potentially suffering from brain damage, with no medical assistance nearby, and of course thoughts of not being able to have a child.

While I eventually made a full recovery, those two events irreversibly changed the meaning of my life and my pursuits. Even though I made a full return to surfing, my confidence was stripped for years to come, while in the background, my desire to have a baby only grew stronger. That’s when something strange began to unfold. Piece by piece, surfing slowly took a backseat, until the desire faded to a completely unfathomable place.

I truly thought that child birth would be the greatest challenge for me to overcome, but I was surprised that it still didn’t trump that one surfing accident. But don’t get me wrong, the experience of birth has still made it to the top of the list as one of my most memorable moments.

I thought I would be one of those mammas that would surf until full term, but that big accident  and many other smaller surf injuries, saw me pulling the plug only four months into pregnancy. I just wanted to keep my baby safe and cocooned, withdrawing from anything that involved the slightest degree of risk, and for the first time in my life I wasn’t permanently sporting a fin cut or bruise anywhere on my body. I couldn’t help but still ride a blow up mat for nine months, but of course the thrill just wasn’t the same.

Now that I’m on the other side of birth, the flame that had burnt dry is now starting to reignite. My passion for surfing is starting to return and there’s no greater feeling to come out of stagnation and harness this renewed energy now that other areas of my life are complete.