There are no heroes, only two lovers navigating their way through unchartered waters. Ever present, is this energetic undertow of a once unbreakable closeness. A closeness often tested to its ultimate limits, through the choppy and messy ocean that is new parenthood.

We toy with softer ways to communicate all those needs that suddenly arise with the arrival of this tiny baby, for we know harsh words can cut deep into our tender minds. Words that return to the memory, in the stillness of another sleepless night.

As caffeine floods my system, I remind myself to find all those little ways to adore her, because I’m certain that any cliche must be true. Enjoy it while it lasts, for time will go so fast. Whispers from passing strangers, almost as frequent as I change her. 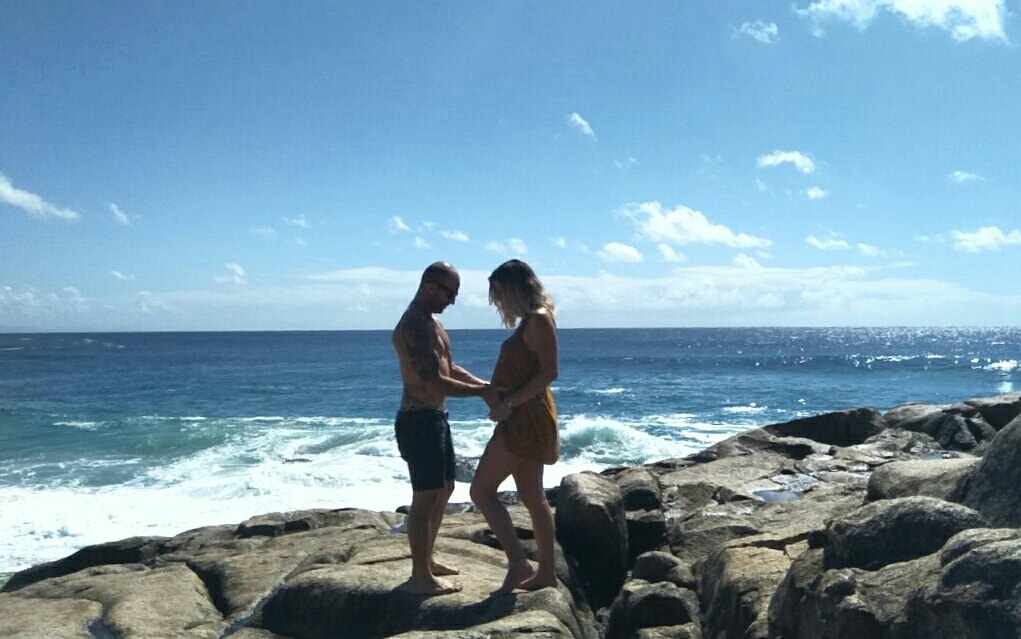 The tired mind struggles to judge the distance between events. The concept of time itself, completely twisted and upturned. Sometimes the days just blur into the nights. These words sit jumbled on the page week after week, before I offer this sneak peek.

But through all of the chaos, there’s these delicate moments that we steal. Just when we think she will never go to sleep, she starts to drift off in his strong arms. I sit quietly by his side sipping each second in. Admiring him. Admiring her. When her little eyelids finally close, we exchange this glance that in itself speaks of that knowing. The knowing that all of these battles are worth fighting for.

As intoxicating as it is, surfing will only fill your cup to a certain level. It just took me all of my teens and twenties to figure that one out. Because back then I would’ve laughed at anyone even suggesting that there might be something equally, or more fulfilling than riding waves. I was just so absolutely obsessed with surfing. That was my world as I knew it. It wasn’t until a strange little flame started to burn somewhere in the depths of my body, that I experienced fleeting thoughts of whether there was something more that life had to offer.

When I found myself standing with my partner in the blazing Timorese sun on a surf trip a few years ago, I wasn’t dreaming about riding the perfect wave that broke outside our bungalow, but rather I visualised swaying in a nearby hammock nursing our baby and wasn’t overly fussed if I surfed or not. I guess that was the true turning point when I realised that perhaps I had milked surfing for all its worth.

Fast forward to the now, I write with our newborn daughter curled up on my chest softly snoring away in her very own dreamland.

There are many times where we each find ourselves looking back on pivotal life events where we recollect the most profound moments, particularly those that have shaped our adult lives. For me, I draw back to when I had returned from extensive overseas travel

and endured the heartache of an abortion. For a long time I battled fears that something might happen in the future that would prevent me from having children, along with a grappling thought that I would be incredibly regretful of my decision to terminate, should I somehow never have the chance to fall pregnant again.

Ironically, not even a year after the abortion, my greatest fear had somehow manifested itself. While travelling solo, I had suffered a head injury surfing a typhoon swell in remote Phillipines. After passing out unconscious and waking with sharp pains in the area of impact, I had to fathom grim thoughts of potentially suffering from brain damage, with no medical assistance nearby, and of course thoughts of not being able to have a child.

While I eventually made a full recovery, those two events irreversibly changed the meaning of my life and my pursuits. Even though I made a full return to surfing, my confidence was stripped for years to come, while in the background, my desire to have a baby only grew stronger. That’s when something strange began to unfold. Piece by piece, surfing slowly took a backseat, until the desire faded to a completely unfathomable place.

I truly thought that child birth would be the greatest challenge for me to overcome, but I was surprised that it still didn’t trump that one surfing accident. But don’t get me wrong, the experience of birth has still made it to the top of the list as one of my most memorable moments.

I thought I would be one of those mammas that would surf until full term, but that big accident  and many other smaller surf injuries, saw me pulling the plug only four months into pregnancy. I just wanted to keep my baby safe and cocooned, withdrawing from anything that involved the slightest degree of risk, and for the first time in my life I wasn’t permanently sporting a fin cut or bruise anywhere on my body. I couldn’t help but still ride a blow up mat for nine months, but of course the thrill just wasn’t the same.

Now that I’m on the other side of birth, the flame that had burnt dry is now starting to reignite. My passion for surfing is starting to return and there’s no greater feeling to come out of stagnation and harness this renewed energy now that other areas of my life are complete.

I think pregnancy tests the minds strengths in many ways, particularly the ability to remain calm when preparing for a natural birth. I mean, I can’t think of anything comparably significant than the  absolute idea of birthing a baby for the first time. We all have to prepare ourselves for so many events in life, but this one surely takes the cake. Mothers are birthing all over the world every second, but to experience the physical and emotional elements of pregnancy day in day out myself, sure is something like no other.

On my early morning barefoot wanders next to the ocean with my big belly out, I often wonder what passerbys think of a pregnant woman in the times of a global pandemic. I hope that they don’t feel pity for her, but rather that they think she is a strong and brave woman. It would be easy to fall into a victim mindset if I allowed myself to go there. Especially as circumstances tug the mind in undesirable directions.

The truth is, there are so many women right now who have had the rug pulled from

underneath them during these mad times. Their birthing plans have been forcefully altered, losing their key support people that were to be present on their big day. Some birth centres have closed their doors to mothers with bulging bellies, and instead welcomed those to test for COVID. I thought my birth space was the last thing that could be touched. Currently we can only have one person present at birth, some countries won’t even allow for that.

The thought of birthing without my partner makes me shudder. Women are rebelling and considering home births, or free-births, without any medical assistance at all, just to avoid the harsh changes within the trappings of the medical system, not to mention the high risk of exposure to the virus in a hospital setting. The usual post-birth train of close friends and relatives visiting the newborn are just not possible in these times. I could never have imagined having that taken away.

Every pregnancy has its challenges and I’m certain every mother tries her best to do what is right for her unborn child, including correct nutrition, avoiding known substances that might harm their baby, sleeping only on her side and keeping the mind as pure as possible. To name a few. But even going to the grocery store has become a rather stressful event in ensuring healthy food is available at home. My need for control has taken on a new level. Surely I’m not too alone in that, as we each do our best to get by with the restrictions in place, set by stronger powers.

I felt I was doing pretty well in gathering my little tribe of woman together prior to the time I found out I was pregnant. I miss them all and wish we could see one another at a time I need them the most. My mum. She is battling rounds of chemo right through all of this. Her immunity is so low that it becomes too big of a risk to be in contact. Besides being on the other side of a policed border. My dad who was due to visit from NZ won’t get to see me pregnant, at least not this time around. While it sounds like a cruel punishment has been handed down on, I know there will be so much goodness to come out of this and I can’t let my mind collapse.

I was thinking the other day how much of a unique time it is to be bringing life into a world that has in essence, been forced to hit the reset button. By the time our baby is old enough to start comprehending bits and pieces of life, things would have irreversibly changed about the way we live our lives, where others will be kind to perfect strangers and the air in which we breathe is once again pure. I know this baby will be much needed medicine not just for their mumma and their pappa, but for so many who are struggling in these times. After all, we must all remember the delicate dance of life and death.